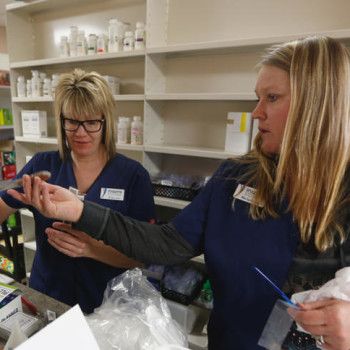 A few last windows and a telephone line weren’t installed until Thursday, and there were some bumps in the road along the way, but Inspire Pharmacy is ready for a grand opening Friday in downtown Grand Forks. “We started talking about this probably three years ago over at Third Street Clinic,” head pharmacist Judy Swisher said.

Swisher, her two pharmacists and two technicians are hosting an open house 11 a.m. to 4 p.m. Friday at 360 Division Ave., Suite 100, for potential customers to check out the new location. The event will feature free food and drinks, door prizes and information about what the pharmacy offers.

Inspire isn’t ready to take prescription orders just yet, but it will be able to fill any prescription for all customers, including low-income clients, in the near future. It will also offer convenience store-type items clients previously couldn’t buy downtown, such as a bottle of aspirin.

“We’ve got cough drops, cough and cold, some skin care, Band-Aids and first-aid cream, lotions, toothbrushes, just what you would hope to find in a pharmacy,” Swisher said.

The pharmacy is open 8 a.m. to 6 p.m. Monday through Friday, and it provides mail and delivery service to clients within a 10-mile radius to serve the Grand Forks and East Grand Forks areas.

Swisher is excited the pharmacy is downtown near the main bus hub and within walking distance for people who live in the area. The next nearest pharmacy is at least a mile away on Washington Street, and “transportation is an issue for a lot of our clients,” she said. Filling a prescription could become an all-day event.

And there were medications Third Street Clinic couldn’t provide that Inspire can, like controlled drugs, including anxiety and pain medications.

“We realized we were not meeting some needs that needed to be met,” Swisher said.

Plus, it’s in the same building as Third Street Clinic, which works to help underserved residents receive health care.

“We’ll continue to work with people who have limited incomes, like we have all along,” Swisher said.

The pharmacy works to help people with hefty copays and or those who qualify for up to 200 percent of the federal poverty guidelines get the prescriptions they need, she said.

And it’s not just about getting a prescription; it’s about understanding it. Instructions that come with a prescription have medical jargon in tiny print. Inspire provides medication management counseling to help customers understand how to properly take a prescription, what it can and cannot be taken with and the side effects.

“I love talking to a patient and realizing they get it,” Swisher said. “They understand what I’m saying to them.”

Profits from the pharmacy go to Third Street Clinic to help go toward its programs. Swisher said the clinic hopes to expand its dental and vision programs beyond emergency situations to help people be able to get regular checkups.

Swisher looked around Thursday evening as people drilled holes or put furniture in place in preparation for the grand opening. She wishes the pharmacy would be able to fill prescriptions opening day, but she said she realized there were some hiccups, such paperwork and insurance details, that slowed down the process.

“But then I look around and I think, man, there were a lot of pieces that had to fall into place,” Swisher said. “We did a good job.”

Read the full article on the Grand Forks Herald